Some Florida insurers may feel like they didn’t score a home run with the recent property insurance reform measures signed into law in May. But they could soon see a friendly umpire on the state Supreme Court, likely to write some significant appeal decisions for years to come.

The Florida Supreme Court Judicial Nominating Commission, chaired by Fred Karlinsky, often described as one of the powerhouse insurance defense and regulatory attorneys in the state, this week submitted to the governor the names of five state-court judges and one practicing attorney.

All have strong conservative bona fides, and three of the judges have written several opinions that are considered to be pro-insurer in property, auto and workers’ compensation insurance cases. Gov. Ron DeSantis will choose one of the jurists to replace retiring Justice Alan Lawson, giving the governor four of his own appointees to the seven-member high court.

The odds-on favorite for Lawson’s spot appears to be Palm Beach Circuit Judge Renatha Francis, whom DeSantis nominated to the high court in 2020. At the time, Francis did not have at least 10 years as a member of the Florida Bar, as required by the state constitution. Now, she does. She would be the only black justice on the court.

“I would very surprised if Francis did not get picked,” said Robert Jarvis, a professor at Nova Southeastern University’s school of law. “Francis is an avowed conservative (she’s a member of the Federalist Society), and her few reported decisions are all strongly pro-insurer.”

Her decisions include Progressive American Insurance vs. Silverland Medical Center, written in 2019 while she was a circuit judge in Miami-Dade County. The opinion overturned a county court judge and found that Progressive did not owe personal injury protection coverage to the assignee, because the owner of the vehicle had never registered the car in order to obtain the no-fault insurance coverage.

The medical center had argued that the vehicle had been parked most of the time, awaiting resale, and was not required to be registered.

“Taken all together, the legislative mandate is clear and unambiguous: motor vehicles driven on the roads of this state must be registered, and have security (PIP coverage), and such security must be continuously maintained throughout the registration period; failure to maintain such security is an absolute bar to entitlement to PIP benefits to a person injured in a motor vehicle accident – including benefits that may have otherwise been available under another person’s policy,” the opinion reads.

Silverland’s appeal was denied by the 3rd District Court of Appeal.

Francis concurred in another 2019 decision that found in favor of State Farm Insurance in an automobile accident case, noting that the insurer had shown that the medical center’s prices could be considered unreasonably high.

The judge did not always see things the insurer’s way, however. In 2019’s United Automobile Insurance vs. Preferred Health, another PIP case, the majority of the circuit judges reversed the county court and found in favor of the insurer. The issue involved the qualifications of the insurer’s physician witness. Francis dissented, arguing that Preferred Health had properly objected to the doctor’s testimony.

Two other nominees, Judge Robert Long and Judge Adam Tannenbaum, both of the 1st District Court of Appeal, also have penned a number of pro-insurer decisions in recent years, according to Jarvis and Florida attorneys who are familiar with the decisions. 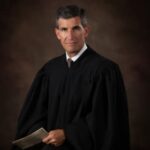 In DSK Group and Zurich American vs. Jorge Hernandez, for example, Tannenbaum in April wrote the majority opinion in a workers’ compensation case. The appellate court narrowed the “going and coming” rule a bit and found that an electrician who was involved in an accident on his way to the worksite was not due benefits, even though he was carrying work supplies at the time.

Steven Silberberg vs. Palm Beach County School Board and York Risk Services was another comp case. Tannenbaum wrote that a teacher was not due compensation after his leg fell asleep, while sitting, and he fell when he tried to stand up. The court noted that the injury did not come in the course and scope of employment since sitting is a normal activity – in and out of the workplace.

In Robles vs. United Automobile Insurance, Tannenbaum wrote that the insured was not due attorney fees in a successful appeal of a trial court’s order that transferred the venue.

“A close reading of that statute reveals that it does not authorize an appellate court to make such an award at the conclusion of an interlocutory appeal,” the judge wrote. Fees can be awarded only after a judgment, he noted. 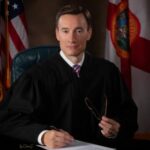 In Walls vs. Southern Owners Insurance, in 2021, Judge Long wrote in the appeals court decision that a volunteer worker killed in a car accident was covered only by her personal auto policy, not the higher-limit policy held by the organization she was working for.

Also in 2021, Long wrote the opinion in State Farm Insurance vs. Nordin, a homeowners insurance case. The court reversed a trial judge, finding that State Farm had a right to appraisal of the property even though it had participated in litigation on the claim.

“Nothing in the record establishes that State Farm knowingly waived or engaged in conduct that implies it knowingly waived its right to appraisal,” Long wrote. “To the contrary, the record reflects deliberate action to evaluate the nature of the claims and then invoke appraisal at the first reasonable opportunity.”

Karlinsky, the chairman of the judicial nominating commission, told a Florida legal news site this week that the six nominees represented “a diverse selection of highly-qualified jurists and practitioners with keen legal minds, who are committed to upholding Florida law and the U.S. Constitution.”

Driving Bike on the Unsuitable Side of the Road: Penalties & Fines